Well we are just over five weeks until Doctor Who is back on our screens and I am getting more excited by the day.

The title of this blog is inspired by the line uttered by Capaldi’s Doctor in the trailer for the new series. However this line alone inspire many different thoughts about The Doctor and about the series.

Since my last blog I thought about what I had written regarding The End of Time, Tennant’s last episodes. I thought I was being a tad harsh about this two part story which ended his and Davies’ reign. So I went and re watched it. I was amazed at what I discovered. In part two of the story the Time Lords were about to hatch the plan to plant the drum beat into the Master’s head…. but hold on. One of the Time Lords said that it was the last days of the Time War, The Doctor had gone missing, he was in possession of the Moment and that he was not afraid to use it. In Tennant’s last episode!!! I have never heard this before! That is directly relating to The Day of The Doctor.

I then started thinking back to last weekend. I was sat in the Supertheatre in Earl’s Court and the three men in front of me; Steven Moffat, John Hurt and Paul McGann, who were answering questions from the audience. A girl asked that in the new trailer for series 8 Capaldi utters the line;

With that in mind, what did Steven Moffat consider to be the makings of a good man?

As we know The Doctor constantly strives to do the right thing and as peacefully as possible. He does not always succeed. If he does succeed it may not have been directly to do with his actions. His companions can over rule him and get it so right, as Amy did in The Beast Below when, as The Doctor was about to put the space whale out of its misery, she made Liz 10 abdicate and release the creature from its torture. The space whale then went on to continue to carry the passengers to safety. 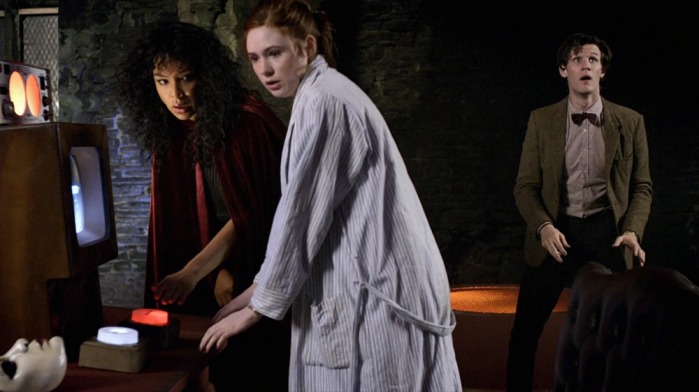 Yes, The Doctor is a good man.

A Good Man Goes to War.

Matt Smith’s Doctor changed the course of his history AND his future. John Hurt’s War Doctor was going to destroy the Time Lords and the Daleks by taking the Moment and pressing that big red button. But Clara showed Matt Smith’s Doctor that instead of him and his Tennant self shouldering the burden of that responsibility of that day, there was another way. All of the Doctors circled Gallifrey with their TARDISes (TARDI ??) and hid their home planet. And it was not just twelve Doctors, but all THIRTEEN !!

Seeing Capaldi’s eyes had me jumping all over the sofa, I can tell you.

So where am I going with all of this? Do I have a point?

Yes I do. And it is only one point I have to make.

Clara helps each Doctor at some point during their lives. Capaldi’s Doctor has to prove to himself that he is a good man. Clara knows what is supposed to happen at the Gallifrey moment and has to get him there.

So that is my prediction for the first episode. She has to get him to that moment in order for it to happen.

Take what you will from my little observations. Let’s just see.